Dad and I left our hotel at about 5:15 a.m. and drove to London Luton airport, where Dad dropped me off so I could catch my flight to Geneva.

The first person I met in the Geneva airport was my Intel partner, Jennifer! Outside baggage claim, we grouped with nine of the 12 CERN Special Award Winners from this year’s Intel ISEF and our chaperones, Wolfgang and Diane. Our little group included students from Hawaii (12 hour time difference!), Kentucky, New York, Chicago, Nevada, Maryland, China, and Turkey. We then took a bus to CERN, arriving at 11:00 am. Our bus had the CERN logo on the side! Since our rooms in the CERN hostel wouldn’t be ready until after lunch, we left our bags in one room and headed to the cafeteria, where Wolfgang handed each of us an itinerary, visitor’s card, and set of meal vouchers. While we were eating, Wolfgang pointed out to us a Noble laureate sitting across the room!

The CERN hostel where we're staying

Aha! There’s a street outside the hostel named after Wolfgang Paul, the Nobel Prize winning-physicist who developed the ion trap, which was the focus of Jennifer and my research!

After lunch, we took a half hour break in our hotel rooms. I use this opportunity to take a shower, while my roommate (Daniela from Chicago) took a jet lag-induced nap.

We then took a bus to Geneva. Our first stop was the Red Cross Museum, where we spent about an hour.

Red Cross flag acting as a ceiling outside the museum.

The gold medal in the center is a replica of the first Nobel Peace Prize.

Our tour guide in front of bookshelves. If you look closely, you can see there are blue, white, and red cases in the book shelves. Those indicate whether the person mentioned in the papers is dead, captive, or missing.

Next, we quickly visited the United Nations headquarters, although we only saw the exterior. 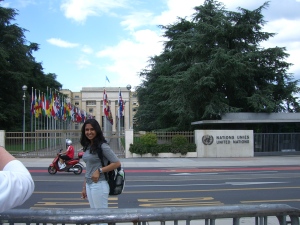 Then, we walked around Lake Geneva. It was a gorgeous day; the lake looked cool and beautiful. I’d love to live in one of the town houses on the mountain side surrounding the lake. 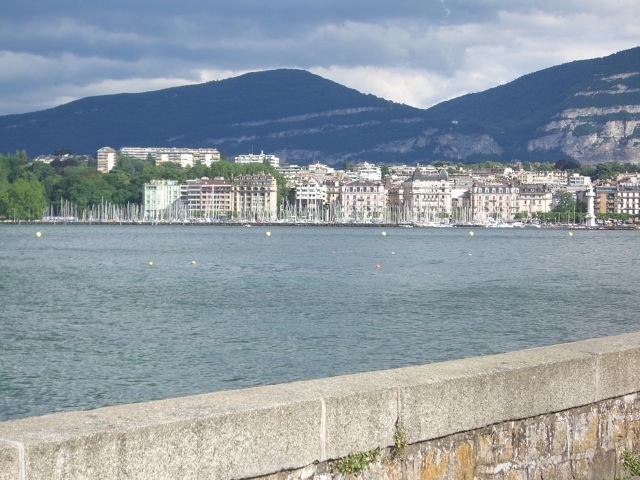 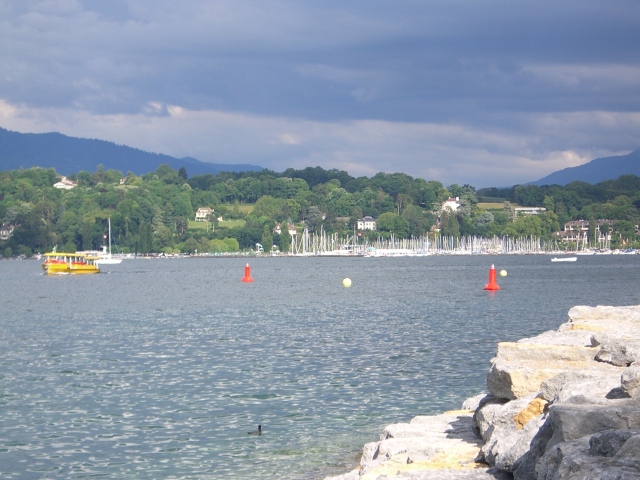 Finally, we took our CERN-bus to an Italian Restaurant for dinner. Afterwards, we walked back to CERN with a computer scientist who speaks four different languages! Along the way, we passed the set of buildings where CERN “clubs” meet, e.g., the music club, food club, etc. It’s nice that CERN employees can indulge in non-science interests. Also, I noticed the street lamps here don’t match, which is a bit strange. Maybe they’re recycled?